A solid return to form for one of death metal’s most controversial innovators.

The mid-90s saw a rising trend of death metal bands moving away from the pre-established template of the likes of Death and Cannibal Corpse and saw a movement set to take the groundwork laid by the latest and greatest of early death metal and dial it up to 11. In 1999, the underground brutal death metal scene would be blessed with Devourment’s savage debut record, Molesting the Decapitated. It’s fair to say that upon its release, their first effort caused a stir in the community, not only for the graphic real world album cover but in the severity of their more grounded lyrics and sheer abandonment of many of the core tenants that made death metal what it was originally. They played faster and more aggressively then a lot of what was being heard before and people took notice.

With that said, all roads lead us to the end of the 2010s, and following a string of good/decent albums which never quite lived up to the infamy of their first release, Devourment have refined and matured their sound and Obscene Majesty is a great death metal record through and through that, whilst offering little new, does what it sets out to do so well that it becomes hard to ignore.

The band have seen close to a dozen lineup changes across their twenty plus year career history, with the main saving grace of Ruben Rosas’ power vocals and band founder and drummer Brad Fincher being as ever recognisable behind the kit as ever. It should be said that Obscene Majesty is a much better produced album than pretty much anything put out by the band previously. Whilst the drum work is still quick and heavy, they have far improved from the percussion production which would in a way, indirectly, inspire the ‘slam sound’ that plagued so many brutal death/slamming death bands in recent years.

It’s not over produced as so many modern slamming death metal bands tend to lean towards these days. Whilst the guitars are very prominent in the mix and the vocals really do take centre stage in a lot of these songs as the main focus point, nothing feels too clean for the kind of brutal metal music that the band creates, as a considerable amount of vocal fans online originally feared as the cover art was revealed. Trust me on this, Devourment have definitely not slowed down, and they certainly haven’t gone soft in any way, shape or form. 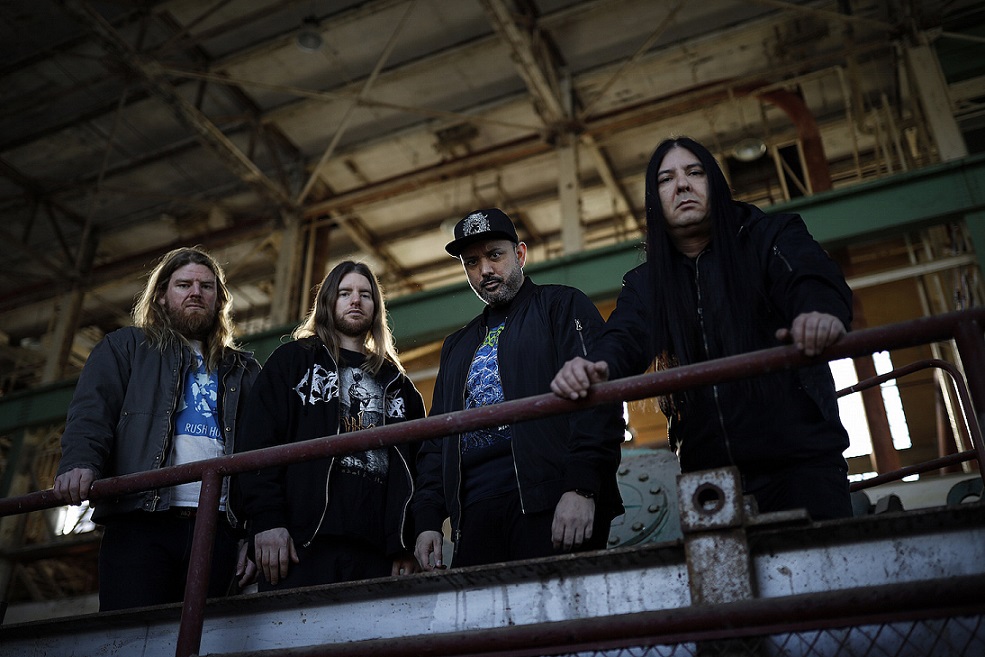 The riffs on display here aren’t going to set the world on fire with their creativity and inspired playing, but they are typically heavy and the mix up of different time signatures and of course, the slamming parts of these tracks, sound appropriately massive. There is a tight and contained feeling to the guitars on the record, it all sounds so free flowing and effortless in a way for Chris Andrews, taking on the duties from Ruben for the first time since joining the band as their dedicated bass player.

As a result things maybe aren’t as ‘creative’ as they could be if the riffs were helmed by Ruben once more but I believe that this change up ultimately gave a sense of freshness to Devourment’s tried and true formula, as fresh eyes and a new perspective to songwriting can with some new blood in the band’s veins. In short, while there are so many gigantic and powerful riffs blasting away with the stellar drums and the savage vocals, you may be hard pressed to find yourself distintively memorising all of them.

There isn’t really a whole lot more that I can say that hasn’t already been said better in the past by somebody else. Do you enjoy brutal death metal or slam? Have you ever listened to any Devourment songs in the past twenty years? If you’ve answered yes to either of these questions in your head, then you’re going to find a lot to love with Devourment’s latest bloody offering. If you’ve never enjoyed or appreciated the genre for whatever reason, well Obscene Majesty will not change your mind, but it will provide a lengthy and satisfying slab of brutal metal music, and sometimes that’s exactly what you need in your life right?

Current 3rd year journalism student at Falmouth University. Writer for Pit of Plagues, The Metal Experience and other music based publications, as well as freelance. View all posts by Aleksha McLoughlin